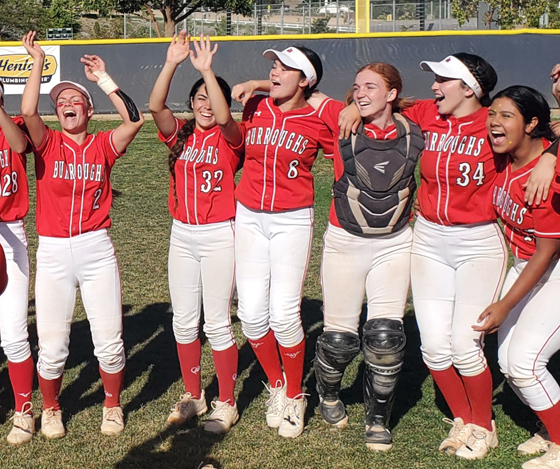 YORBA LINDA >> The Yorba Linda softball team put runners on base in multiple innings Thursday but couldn’t get the clutch hits it needed against Burroughs of Burbank in the CIF-SS Division 4 quarterfinals at Yorba Linda High School.

The Bears, however, delivered in the clutch at the plate and in the field and came away with a 4-0 victory over the Mustangs.

Kiley Christopher went 2 for 3 with two RBIs and Rachel Little and Isabella Scozzola had one RBI each for the Bears (23-9), who will host Temple City in the semifinals Saturday.

“The good thing is that there are no holes in our lineup,” Burroughs coach Doug Nicol said. “Every girl can hit.”

Pitcher Madalyn Martin went 2 for 3 to lead the Mustangs (18-10), who finished first in the North Hills League.

“We just didn’t get that one timely hit,” Yorba Linda coach Nicole Dewitt said. “It is just the way the game played out today. It happened to go in their favor. They made a lot of good defensive plays and their pitcher was outstanding.”

Yorba Linda had runners in scoring position in the second, third, fourth, fifth and sixth innings.

The Bears were leading 1-0 with two outs the fourth when the Mustangs tried to score a runner from second on a single to right field by Kendra Gominsky.

Right fielder Mia Ramirez made a perfect throw to second baseman Kelsey Acosta, who then fired home to the catcher, Little, who put a tag on the runner for the third out.

Martin was sharp through the first three innings and also got some help from Gominsky at shortstop. She made a nice catch in the second on a line drive with no outs and a runner on first, and she then threw over to first Natalie Smith to double up the runner who had been running to second.

With two outs and a runner on first in the fourth, Christopher broke the scoreless tie with an RBI double.

In the fifth, Little drove in Mia Ramirez from third on a ground out to give the Bears a 2-0 lead.

Scozzola doubled Gigi Garcia in the sixth, and then scored herself on a single from Christopher two batters later.

“We did have some situations in the middle of the season where we would leave some people on, so we’ve really been working on our situational hitting,” Nicol said. “So it’s really been paying dividends. We’ve really started to hit better in the playoffs.”