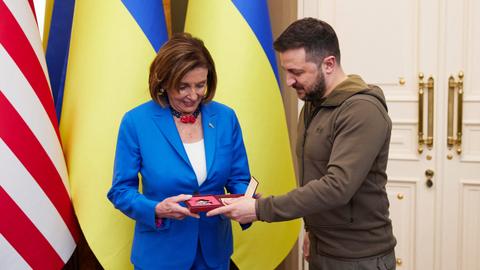 US pledges continued support for Ukraine as fighting – now in its 68th day – stretches along a broad front in southern and eastern Ukraine’s Donbass region.

Ukraine’s president has described his hours-long weekend meeting with US House Speaker Nancy Pelosi in Kiev as a “powerful” signal of support in a difficult time.

Zelenskyy said his meeting with Pelosi included discussions of defence supplies to Ukraine, financial support and sanctions against Russia.

Zelenskyy said Ukrainians “are grateful to all partners who send such important and powerful signals of support by visiting our capital at such a difficult time.”

A Ukrainian military officer has said that Russian forces have resumed their shelling of a steel plant in the port city Mariupol immediately after the partial evacuation of civilians.

Shlega said that at least one more round of evacuations is needed to clear civilians from the plant. He said dozens of small children remain in bunkers below the industrial facilities.